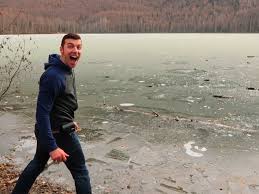 A Trip to the End Zone

They came from a small Texas college but played football with big hearts. What they lacked in physical skills (and mental acuity), they countered with dogged determination.

Since most of them had never been to Minnesota, after the game, they explored.

When the first one fell through the frozen lake, player number two ran to the rescue. More ice broke. Two down.

After the entire offensive line sank, a fisherman addressed the punter.

“If they stopped and thought about a ladder, they could’ve displaced their weight and rescued everybody safely,” the man said.

“Yeah, said the punter, “not really our style.”

Prompt: Will minus intellect